Your cart is currently empty.

Dogs are one of the most popular animals in the world with many people loving and caring for them. The recent pandemic has fueled even more people to decide they would like a furry friend by their side, the majority turning to Google to do their research.

We could talk about dogs all day, really, but let’s just keep it fairly quick for you.

Here’s a quick rundown on our findings, however, we promise the rest of the article is just as interesting!

Most Popular Dog In The USA Based on Google Searches

Ok, ok… so we know that searching something on Google doesn’t mean you’re going to go and get one. But we took at look at the average numbers of searches per month in Google USA (across the country and then state by state) using kwfinder.com to find the most searched breeds.

French Bulldogs are the most popular dog breed searched on Google in the past 12 months in the USA. There have been 1,320,000 average monthly searches for Frenchies.

The Cane Corso comes extremely close behind with 1,230,000 average monthly searches in the past 12 months.

Third most popular is the Greyhound with 1,140,000 average monthly searches.

Most Searched Dog Breed By State

Although the Cane Corso is only the second most searched dog on Google in the USA, it’s actually the most popular searched dog in MORE states than the French Bulldog as you can see below. 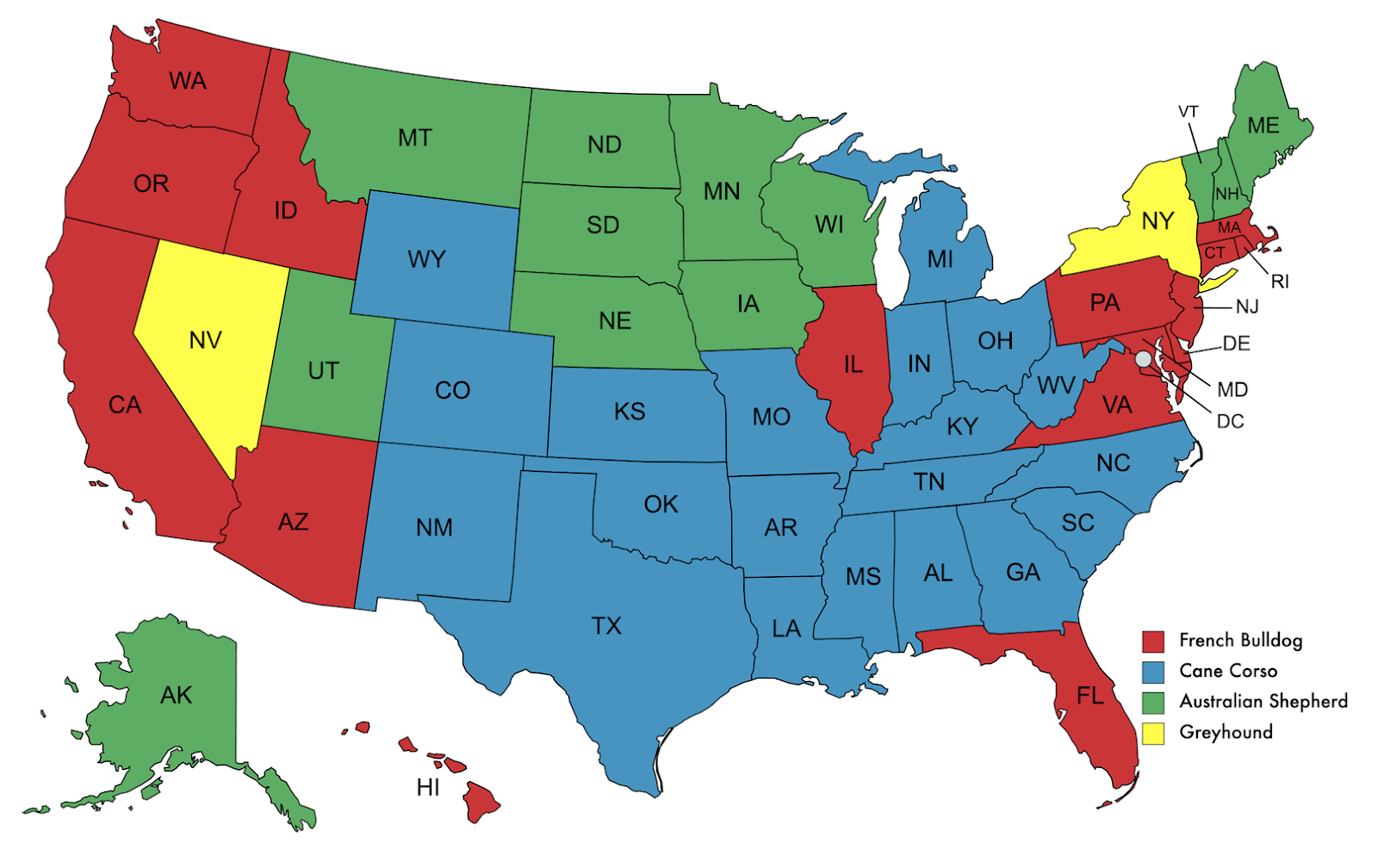 Even though the Greyhound is 3rd most popular in the USA as a whole, the Australian Shepherd does in fact get searched more in multiple states.

Most and Least Popular Dog in Terms of Online Searches

In the USA, the least popular dog is the Plott Hound. This poor dog has only been searched a monthly average of 1700 times in the past 12 months. As you can see below, the Plott Hound has never really been popular at all since 2004. The French Bulldog has had a clear gradual rise to popularity compared. 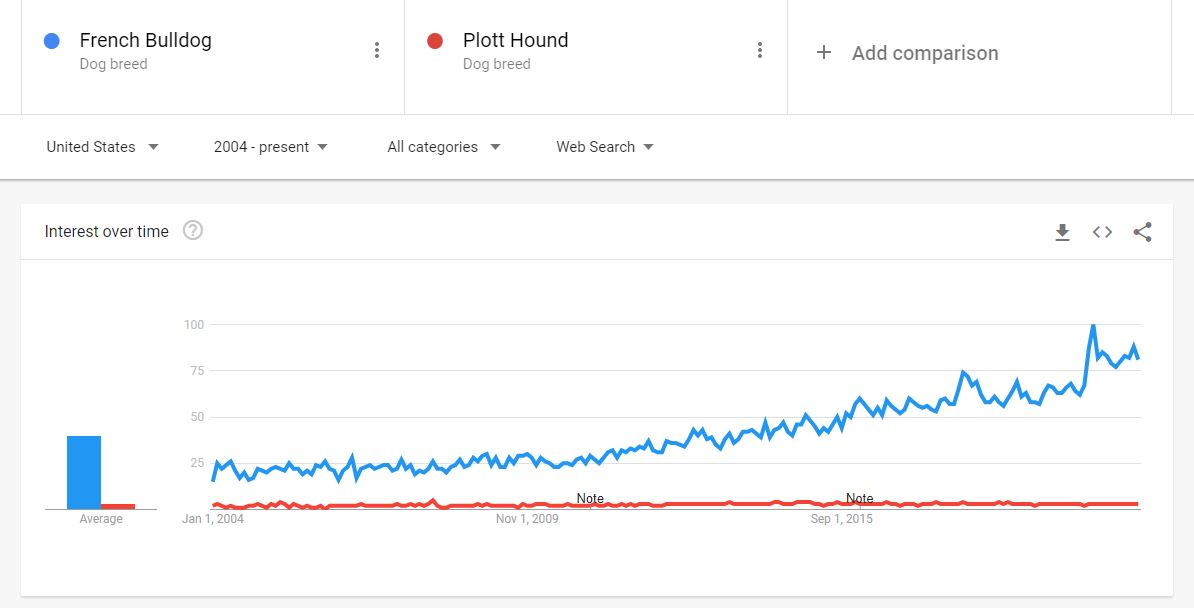 The Greyhound was actually more popular than the French Bulldog and Cane Corso in 2004 onwards. It was only until around 2008 when the Frenchie overtook the Greyhound to be searched more.

The Cane Corso was actually fairly level with the Greyhound from around 2010 until more recent years where the Cane Corso has taken over.

It’s clear from the graph, though, that the French Bulldog is a clear winner in the popularity race. 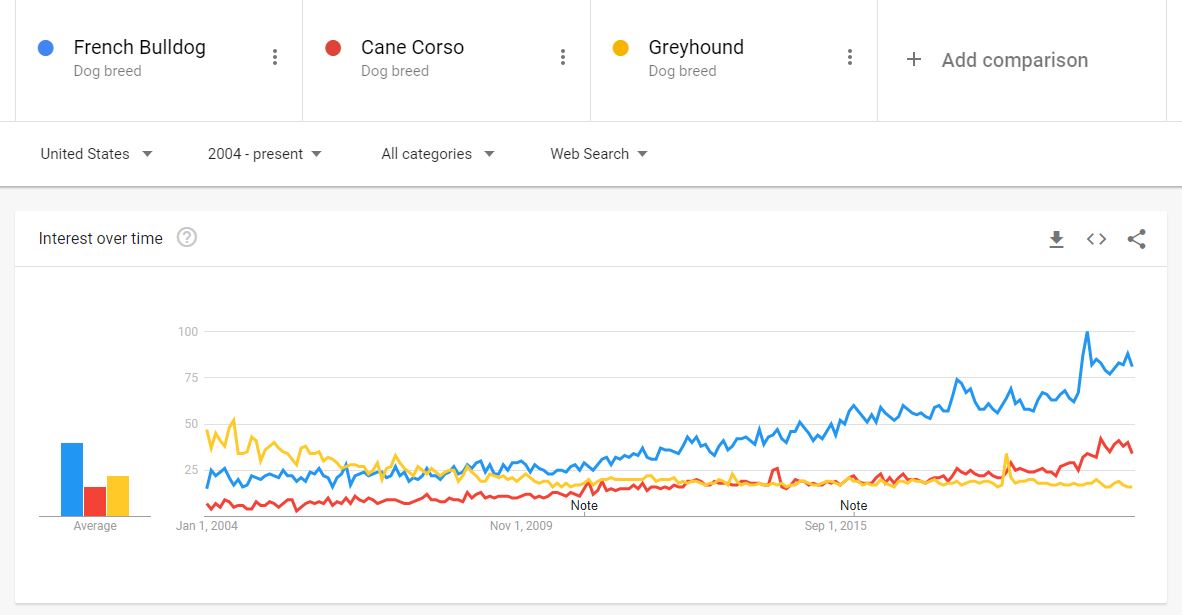 If you’d like to own a dog based on how popular it is on Instagram, it may come as no shock that the French Bulldog is the most popular dog on Instagram in terms of how many posts per hashtag.

This is followed by the Chihuahua which only has a couple million less posts with 29.2 million at the same point in time.

Most Popular Dog By Registration

The top 3 most registered dogs in the USA in 2020 according to American Kennel Club (AKC) is:

This doesn’t correlate too much as the Labrador Retriever is only 33rd on the most searched dogs in America in the past 12 months. However, this could be due to the fact that because it’s a fairly popular dog, people don’t need to search it and research them as much.

Although the breed is banned in multiple states, it still remains the most searched breed, with some really high search volumes, in some of those states.

All in all, the French Bulldog is a clear winner when it comes to popularity. It’s clear that it takes the lead in terms of social media platforms too. Even though the Cane Corso is banned in many states, it’s still extremely popular to search in America.

However, we hope this information might help you to decide on a dog breed you may want yourself one day. Have fun!

Search volume data is based on research carried out in kwfinder.com. The full data sheet is available to download here.

Add this cat toy to your cart and get 20% OFF your entire order.

Why Cats Go Crazy Over Our 5-in-1 Windmill Cat Toy:

30-day full refund guarantee. If you're not happy with the product or the color is not right for your cat, we will refund you or exchange the product for free.